Thematic report: The role of education in preparing young people for the challenges of the 21st century

Below is the digital summary of the report, “The role of education in preparing young people for the challenges of the 21st century”. Download the full report here. (In French) 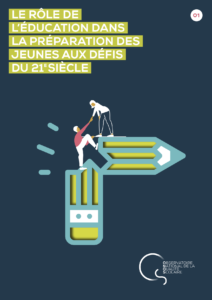 The importance of integrating the development of key competencies of the 21st century into school curricula and their implementation at the level of education systems has shaped political and scientific discourse since the publication of the “Rapport Delors” in 1995, which promoted a humanistic and holistic approach to preparing children and young people for the world of tomorrow.

However, it should be noted that a structured, explicit and sustained public debate on this crucial issue has not yet taken place in Luxembourg and that the questions raised in the “Rapport Delors” are still relevant. The decision to produce this report, which reviews the scientific literature on the 21st century competencies, stems from the desire to contribute, through its forward-looking nature, to the development of a shared vision for our school system and to help policy-makers identify priority courses of action.

This shared vision should be based on the concern to prepare young people as well as possible to become engaged, autonomous, self-confident citizens capable of facing the complex, diverse and unpredictable challenges of the 21st century knowledge society. The knowledge society is also referred to as the information society because of the exponential growth of information and data.

The challenges facing the 21st century society are complex and diverse: globalisation, climate change, limited availability of resources, increasing poverty, environmental pollution, ethical aspects of artificial intelligence, loss of biodiversity, and demographic and digital change have significant implications for the world of work, socialisation and well-being.

Besides, the needs of the labour market have changed and we have evolved from manual workers performing repetitive tasks to workers capable of innovation and creativity.

Complex challenges and the rapid development of information and communication technologies have a significant impact on socialization, well-being and the world of work, and require transversal competencies, which are summarised under the term “21st century competencies”.

Figure 2: Given the rapid changes the 21st century society is facing, it is not surprising that education has been overtaken by technological progress, as was the case in the Industrial Revolution era. 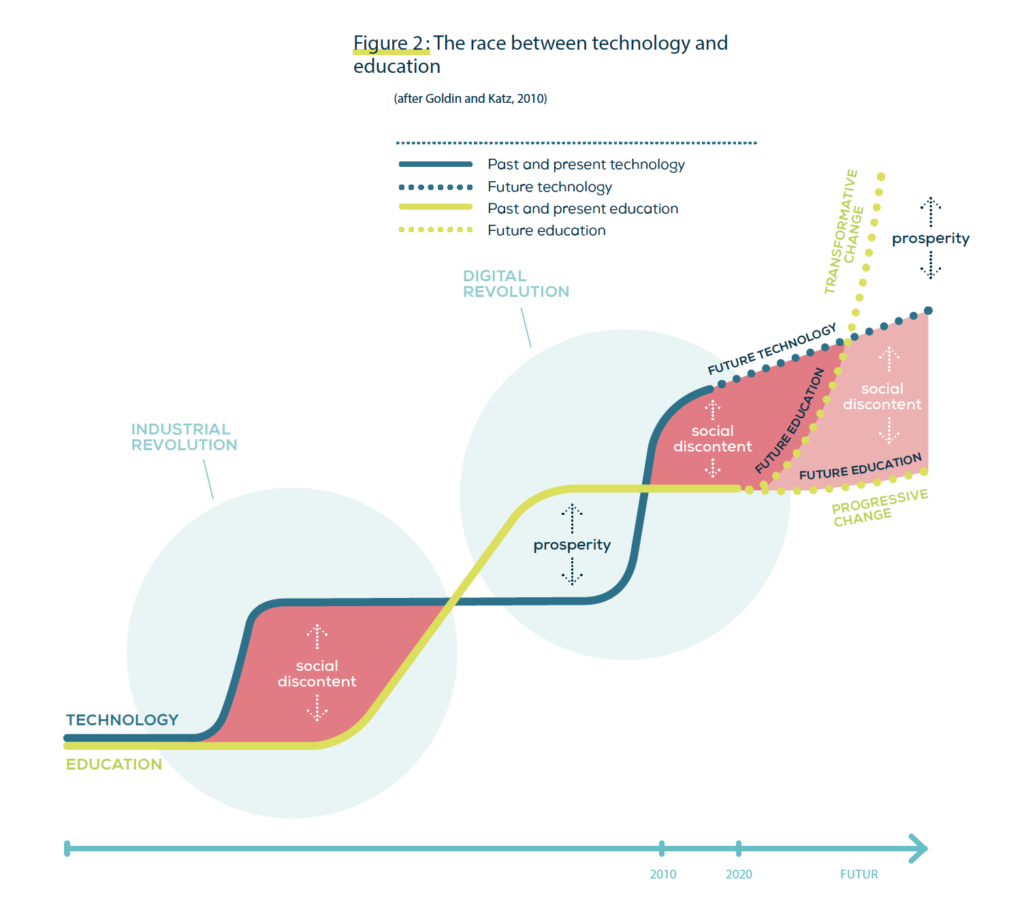 Numerous studies have noted the importance of the 21st century competencies for academic and career success as well as personal well-being.

With this in mind, the ONQS recommends adopting the 21st century key competencies framework, which it has synthesised based on a series of meta-analyses. This framework, which presents a humanistic and holistic vision of education, is both concrete and balanced, adapted to the Luxembourg context and the expectations of our society. It includes three types of competencies, which are interconnected and combined to achieve in-depth learning:

Figure 3: The ONQS’s synthetic framework, shown in Figure 3, consists of three types of competencies, cognitive, interpersonal, and intrapersonal, which are interconnected and combined to achieve in-depth learning: 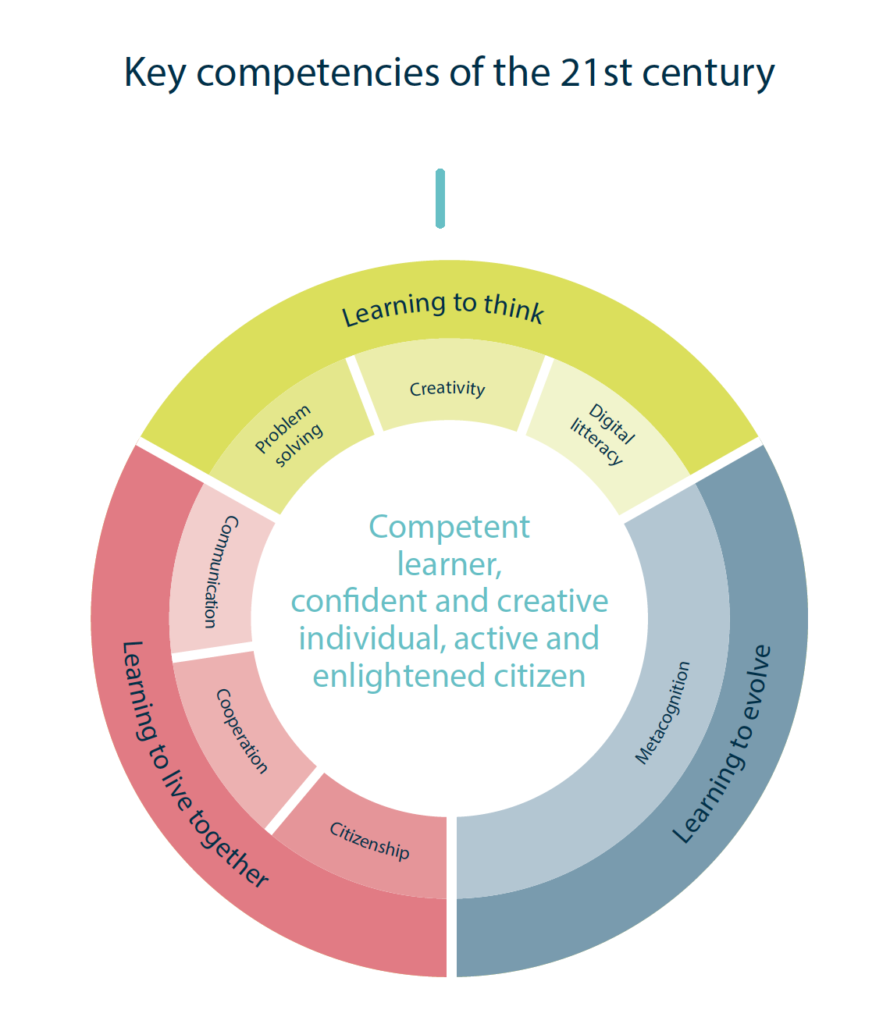 The importance of the systematic development of 21st century skills has also been highlighted by the studies of Hattie (2015, 2017), whose synthesis of meta-analyses revealed that 21st century competencies have a moderate, if not strong impact, on educational attainment. Indeed, he found the effects illustrated in Figure 4:

On the other hand, several international studies (PISA, ICCS, ICILS) show that Luxembourgish students perform below average in tests assessing student performance in collective problem solving, digital literacy, computational thinking and citizenship. These findings underscore the need for a gradual, structured and systematic development of the 21st century skills in pedagogical practices.

Regarding the above findings, the ONQS advocates the development of a national curriculum framework from early childhood to upper secondary education and vocational training, with the key competencies of the 21st century as its cornerstone.

This national curriculum framework would include traditional subjects, specific 21st century subjects such as programming, engineering, robotics and artificial intelligence, and interdisciplinary subjects of great importance to the 21st century society, such as the environment and sustainable development, living together in a multicultural society, media, health and financial education. 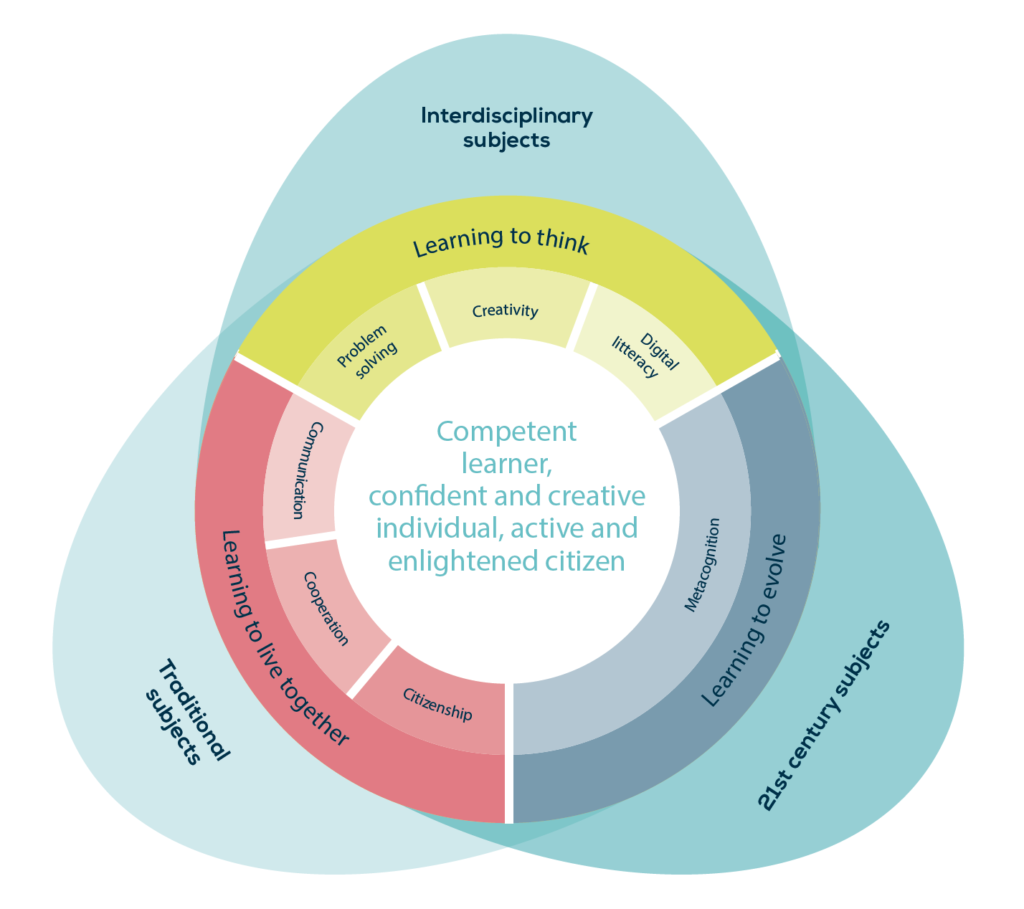 The 21st century key competencies form the foundation of the traditional disciplines, 21st century disciplines and interdisciplinary themes and are combined with the specific competencies developed in the various disciplines. In addition, a continuum defining the levels of competence to be attained at different stages of schooling, from early childhood to upper secondary, would translate expected performance into concrete outcomes and provide guidance to teachers in their lesson planning and assessment.

Over the last decade, education policy has introduced several measures to support the development of specific 21st century competencies, particularly in the areas of digital literacy, citizenship and creativity (see Chapter 6.1). While these initiatives are all important, it must be said that the competencies identified as essential for today’s students to face the challenges of the 21st century with confidence have never been the subject of a dedicated and structured approach at the level of the education system in the Grand Duchy of Luxembourg.

To this end, and regarding the provisions of Article 4 of the law of 13 March 2018 establishing the National Observatory of School Quality, the ONQS makes the following recommendations:

The ONQS endorses a holistic vision of young people and recommends adopting its synthetic framework of key competencies for the 21st century as a national reference.

The ONQS recommends the creation of a national curriculum for the entire school education with the 21st century key competencies as its cornerstone.

With this report, which reviews the scientific literature, the ONQS sees itself as a catalyst for a process of dialogue and discussion. By following the steps of its participatory evaluation approach, the publication of this report will be followed by an enrichment phase. During this stage, the report will serve as a basis for discussion with stakeholders from all levels of the education system, representatives from the Ministry of National Education, Children and Youth, and representatives of civil society.

Following these consultations, an exchange phase will take place to bring the school community and the research field closer together. Finally, the ONQS will develop a set of recommendations regarding the implementation of 21st century key competencies in teaching practices, which will be forwarded to the Minister of National Education, Children and Youth and the “Chambre des deputes” (development phase).